*Scroll down for information on the Art Docent program and for past lessons.*

What is the Art Docent Program?

At Crestwood, we love to see students express themselves in creative ways and
are determined to bring art to the attention of even our youngest students. the PTA has partnered with Green River College's ICA (Interurban Center for the Arts - https://greenrivercollegefoundation.org/ica) to bring fine arts into the classroom by supplementing the classroom art curriculum. Docents are volunteers with varying degrees of art training or ability that work toward introducing kids to famous artists, artistic movements, and the basic elements of art and principles of art design.

In a typical year, an art docent or set of docents come into the classroom once a month to teach a small art history lesson then lead an art activity based on an artistic idea or concept. The good news is that lessons and training are provided for docents. So, no experience is required. For questions or to volunteer, please contact Art Docent Chair Tiffany Phillips at tiffanyphillips85@yahoo.com.

During remote learning, docents will host one lesson per month for all students K-6 on the 1st Wednesday of each month. They will then be available on the Crestwood PTA 9 7 11 YouTube page.

For general information about the Art Docent Program itself, visit this page: https://www.artdocentprogram.com/the-art-docent-program/what-is-it/ 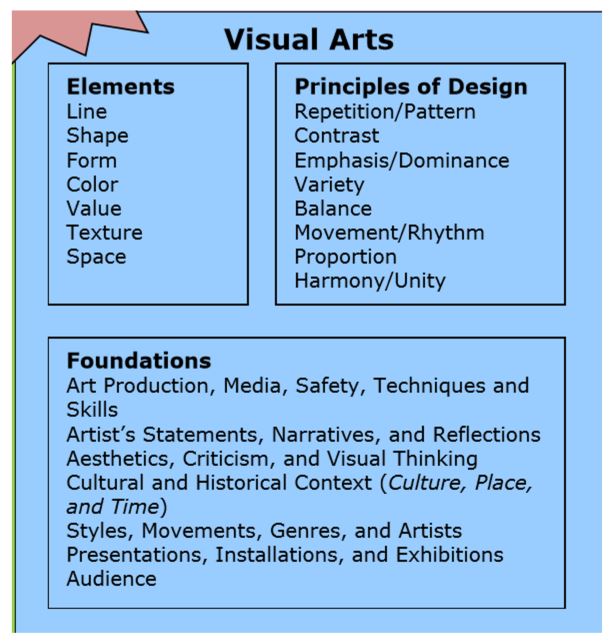 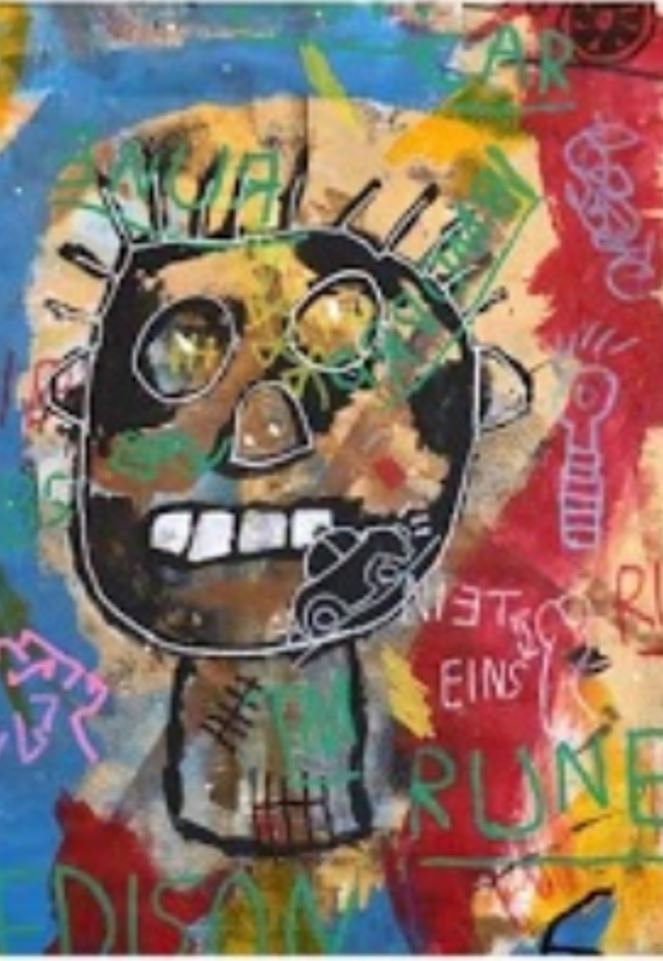 Artist info – Jean-Michel Basquiat was born in Brooklyn, New York, on
December 22, 1960. With a Haitian-American father and a Puerto Rican mother, Basquiat's
diverse cultural heritage was one of his many sources of inspiration. After his mother was
institutionalized for mental illness, Basquiat left home at 17 and eventually rose to prominence
as a street artist by the name of SUMO. By the time he was 20, he had his first art show, and his
art took off in the middle of the neo-expressionist movement. His work and style received critical
acclaim for the fusion of words, symbols, stick figures, and animals. Soon, his paintings came to
be adored by an art-loving public that had no problem paying as much as $50,000 for a Basquiat
original. Basquiat died in 1988 at 27 years old in the prime of his popularity. Art collectors value
his work, and in 2017, Basquiat’s 1982 painting of a skull called “Untitled”, sold for $110.5
million dollars, making it the most money ever paid for art created by an American artist, for
artwork created past 1980, and by a Black artist. 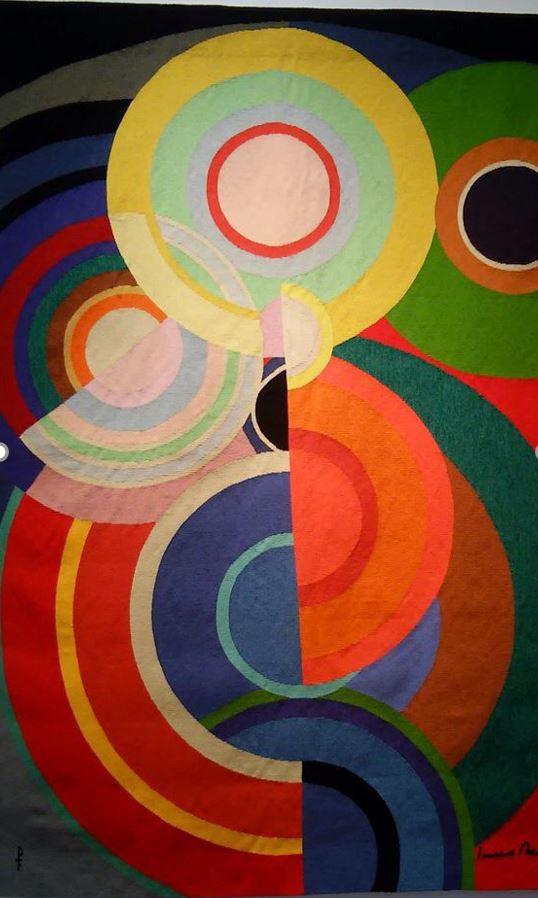 We will explore the marriage of bold colors and geometric shapes using the style of Orphism, an art movement co-founded by Sonia and Robert Delaunay. This lesson we will focus on the Principle of Design called Rhythm as well as talk a bit about color theory.

1 - Math compass (to be used instead of circle templates)

Artist info – Sonia Delaunay was born, Sarah Ilinitchna Stern, most likely born on 14 November 1885 in Hradyzk, Ukraine (today Poltava Oblast) then part of the Russian Empire. She showed an early interest in art and was taken in and eventually adopted by her well-establish aunt and uncle. At 18 she was sent to Germany to art school but got bored with the constaints of painting at the time. She wanted less rules and more color. As a result, she developed her own style of art.

Sonia Delaunay was a painter and designer who utilized bright colors and geometric shapes in her work. Her art was influenced by both Russian and French styles, and she is remembered for both her fine arts and applied arts, particularly in fabrics and textiles. Her interest in art-deco and abstract art influenced her work in many areas, including fashion and costume design as well as interior design. Although she is associated with several artistic movements, she is most often connected with a school of art called ‘Orphism’, which branched out of ‘Cubism’. This was an artistic style that she and her husband Robert developed together, beginning in the pre-WWI era. Whether she was painting or working with fabric, she generally used bright colors and repeating patterns.

She is remembered for her innovative dress and costume designs as well as interior design objects and design work she did for stage sets and films. Although she often thought of her textile work as a kind of exercise to help her in what she saw as her more important work of painting, she may have left behind a deeper legacy in the world of fashion design. She created many beautiful and sophisticated fabrics. She died in Paris in 1979 at 94 years old. 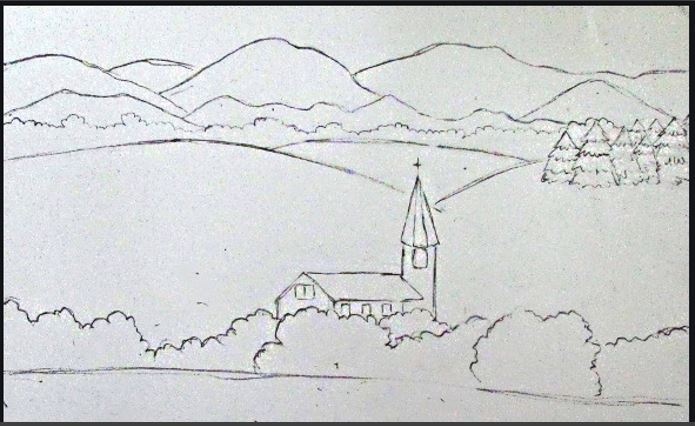 Project info – We will follow the evolution of landscapes from Chinese artists born 1, 000 years ago, to the modern landscape artists of today. We'll talk about the definition of landscapes, the three different kinds of landscapes (representational, abstract, and impressionistic), and the elements of art and principles of design used for landscapes, focusing primarily on: line, shape, emphasis, balance, unity, value, and size. 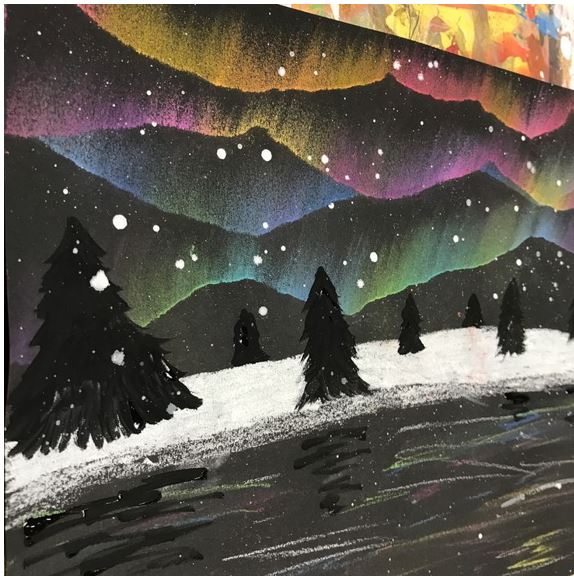 Lesson #4: Art for a Cause - Northern Lights

Project info – We will continue to study landscapes, moving from a representational landscape to an abstract landscape featuring the northern lights. We will work with color, negative space, balance, contrast, size, distance, and proportion. Instead of studying a specific artist, we will discuss how artists use their works as a voice, often times creating art for a cause. In the case of this project, the cause was bringing attention to Alaskan Conservation.

Project info – This month we will delve into an avant-garde (experimental) art movement called, Cubism. Cubism is a style of art which aims to show all of the possible viewpoints of a person or an object all at once. It is called Cubism because the items represented in the artworks look like they are made out of cubes and other geometrical shapes. Cubism inspired other art movements, including: Abstract art, Orphism, and Purism.

For this lesson we will take a common object, cut it on different planes (lines in space), and reassemble it in random order. This will give it that cubist approach of being in many dimensions at the same time. We are using an analogous color scheme primarily in the cool tones. Analogous colors are colors that connect to or touch each other on the color wheel, though usually thought of in groups of three colors.

Cubism is considered to be the most influential art movement of the 20th century and is often associated with Paris in the 1910s and 1920s. The most famous Cubist painter was Pablo Picasso but the movement was also created by Georges Braque. A third-wheel of the Cubist movement was Juan Gris, who invented collage. This lesson is essentially a cubist collage and is inspired by the artists above. For an interesting look at collage and Cubism, check out this article by The New York Times: https://www.nytimes.com/interactive/2021/01/29/arts/design/juan-gris-cubism-collage.html

Templates for Clover and Grid 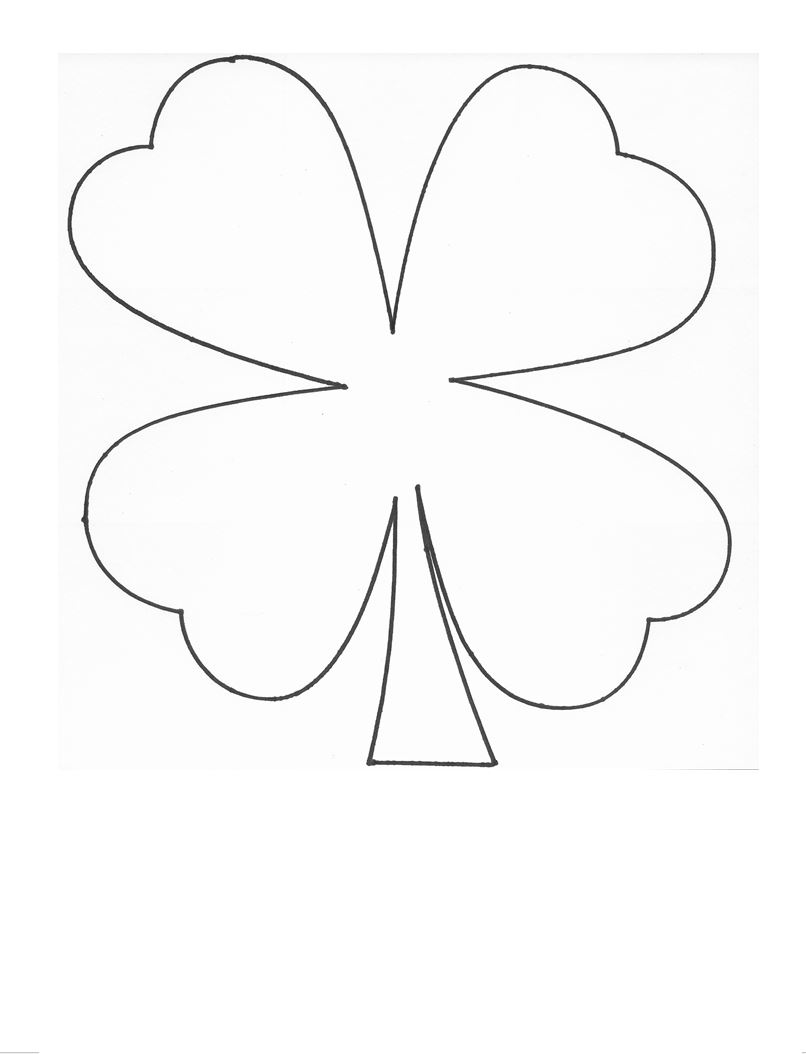 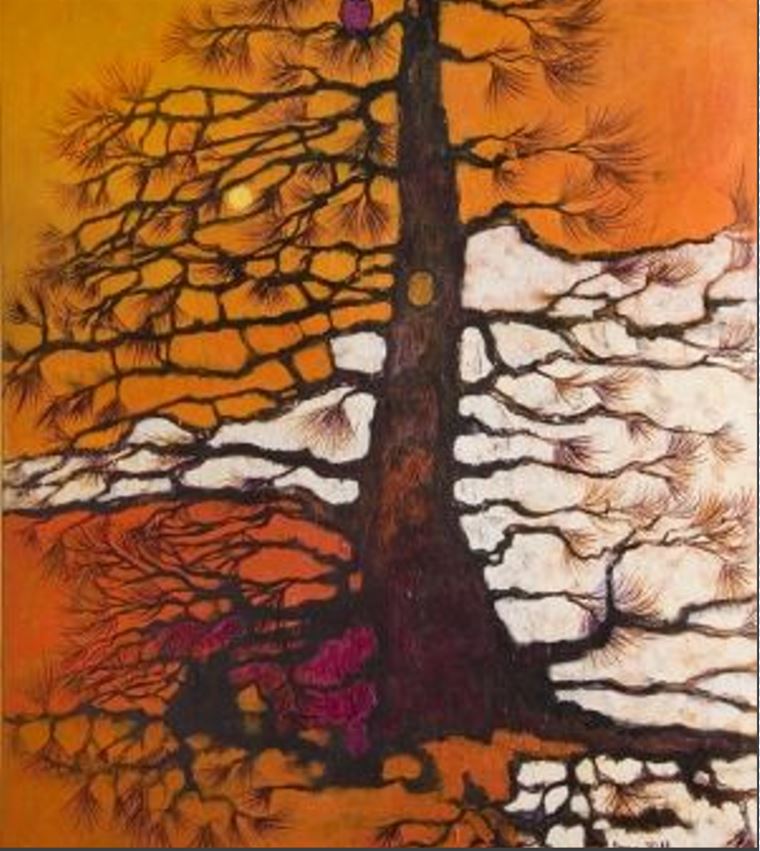 Institutions holding her works include the Smithsonian Institution in Washington, D.C., the Heard Museum in Phoenix, Bacone College and the Five Civilized Tribes Museum in Muskogee, the Museum of Northern Arizona in Flagstaff, the Museum of New Mexico in Santa Fe, and the Philbrook Museum of Art in Tulsa. In 1974 the Five Civilized Tribes Museum designated her a Master Artist, the first woman to be so honored.

By 2001 Hill had accumulated 270 awards for her paintings, making her the most honored American Indian woman artist in the United States. She served on the Governor's Commission on the Status of Women (1990) and as a commissioner on the U.S. Indian Arts and Crafts Board (2001). The Philbrook awarded her the Waite Phillips Special Artists Trophy for lifetime achievement, the Smithsonian Institution designated her one of the People of the Century, and she received the Academia Italia's (Cremona) Oscar D'Italia Award in 1985. She resided in Muskogee at the time of her death on June 16, 2020. 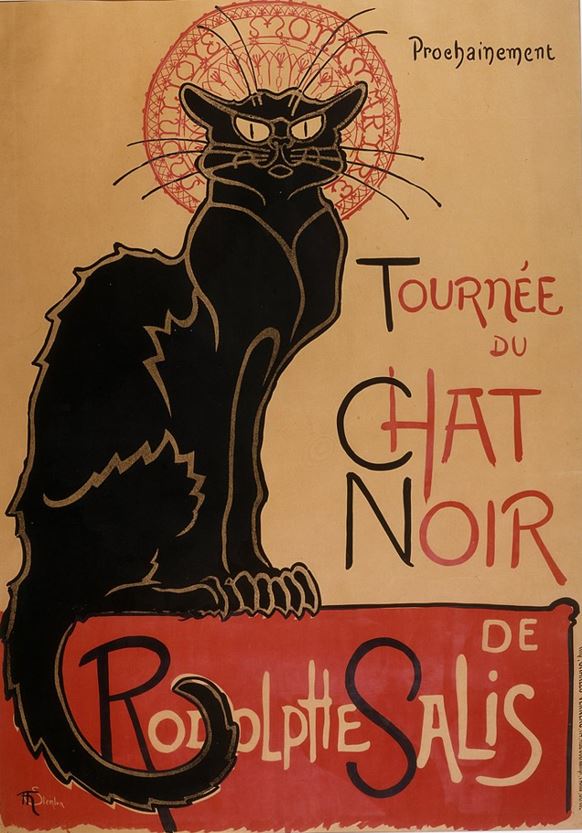 Other: scissors, cup of water

Artist info –  Théophile Alexandre Steinlen (November 10, 1859 – December 13, 1923), was a Swiss-born French Art Nouveau painter and printmaker. Born in Lausanne, Switzerland, Steinlen studied at the University of Lausanne before taking a job as a designer trainee at a textile mill in Mulhouse in eastern France. In his early twenties he was still developing his skills as a painter when he and his wife Emilie were encouraged by the painter François Bocion to move to the artistic community in the Montmartre Quarter of Paris.Once there, Steinlen was befriended by the painter Adolphe Willette who introduced him to the artistic crowd at Le Chat Noir that led to his commissions to do poster art for the cabaret owner/entertainer, Aristide Bruant and other commercial enterprises.

In the early 1890s, Steinlen's paintings of rural landscapes, flowers, and nudes were being shown at the Salon des Indépendants. His permanent home, Montmartre and its environs, was a favorite subject throughout Steinlen's life and he often painted scenes of some of the harsher aspects of life in the area. His daughter Colette was featured in much of his work. In addition to paintings and drawings, he also did sculpture on a limited basis, most notably figures of cats that he had great affection for as seen in many of his paintings. Steinlen included cats in many of his illustrations, and even published a book of his designs, "Dessins Sans Paroles Des Chats."

Between 1883 and 1920, he produced hundreds of illustrations, a number of which were done under a pseudonym so as to avoid political problems because of their harsh criticisms of societal ills. His art influenced the work of other artists, including Pablo Picasso. Théophile Steinlen died in 1923 in Paris and was buried in the Cimetière Saint-Vincent in Montmartre. Today, his works can be found at many museums around the world including at the Hermitage Museum in St. Petersburg, Russia. and the National Gallery of Art in Washington, D.C., United States. A stone monument by Pierre Vannier was created for Steinlen in 1936; it is located in Square Joël Le Tac in Paris 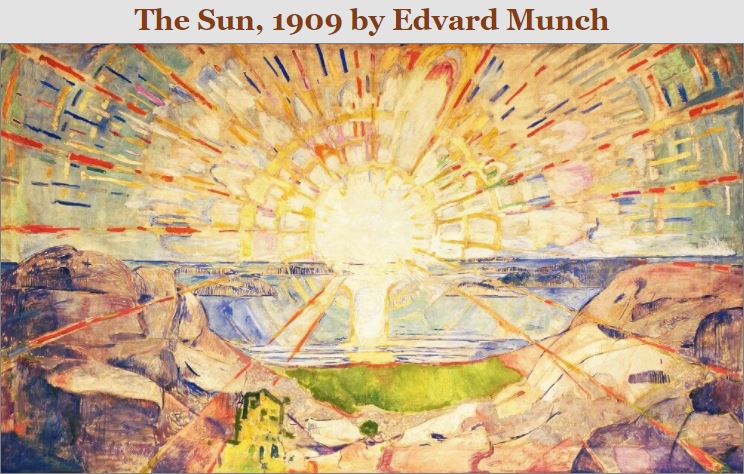 His childhood was overshadowed by illness, bereavement, and the dread of inheriting a mental condition that ran in the family. Nihilist Hans Jæger urged Munch to paint his own emotional and psychological state ('soul painting'). From this emerged his distinctive style.

The Scream was conceived in Kristiania. According to Munch, he was out walking at sunset, when he 'heard the enormous, infinite scream of nature'. The painting's agonized face is widely identified with the angst of the modern person.

•Between 1893 and 1910, he made two painted versions and two in pastels, as well as a number of prints. One of the pastels would eventually command the fourth highest nominal price paid for a painting at auction.

•As his fame and wealth grew, his emotional state remained insecure. He briefly considered marriage, but could not commit himself. A breakdown in 1908 forced him to give up heavy drinking, and he was cheered by his increasing acceptance by the people of Kristiania and exposure in the city's museums. His later years were spent working in peace and privacy. Although his works were banned in Nazi Germany, most of them survived World War II, securing him a legacy.